Detailed and Easy Guide for Recording Gameplay on Pc

In this article, we will list some game recorders for pc that will be helpful to record your PC screen while playing games with steps that will serve as a guideline to complete the process.

We can use Free Game Recorder to record gameplay, which you don’t have to pay to get. The following are a few selected Free Game Recording Softwares for PC with their guidelines, pros, and limitations;

Game Bar is an app that helps to record and share gameplay. It allows a record clip of about two hours. Users do not have to manually download the Game Bar on their PC as it comes with Windows 10.

You can always use the Game Bar with any Windows 10 PC, it can be switched on and off by the user. For it to work well, the PC meets the minimum system requirement. The following are guidelines to follow to use a Game Bar;

The first step in using Game Bar to record gameplay is to select the game you want to play and thereafter record. Any game preferred by the user can be selected because the Game Bar embraces most games.

After you must have selected the preferred game you want to play, the next step to take is to use or employ the controllers. You can also press the WIN ICON + G keyboard combination to bring out the controls of the Game Bar. Remember to open the Xbox Game Bar from the gaming menu. 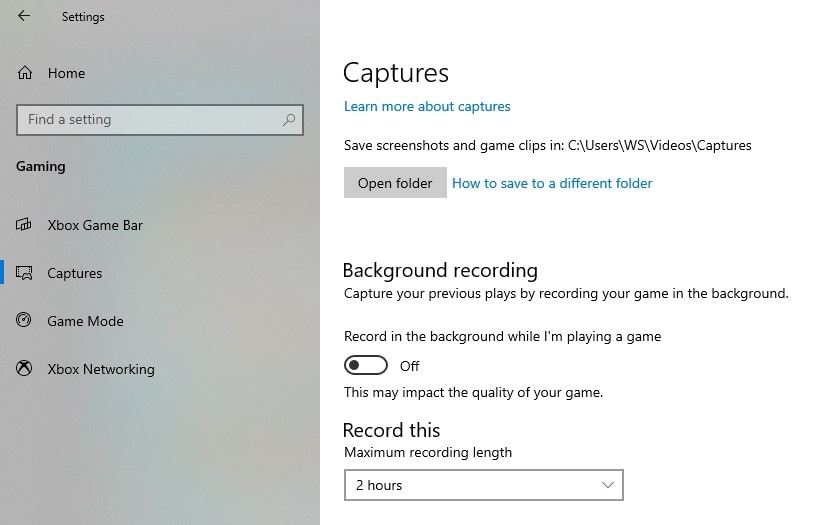 STEP 4 Start and stop the capturing with buttons or shortcuts 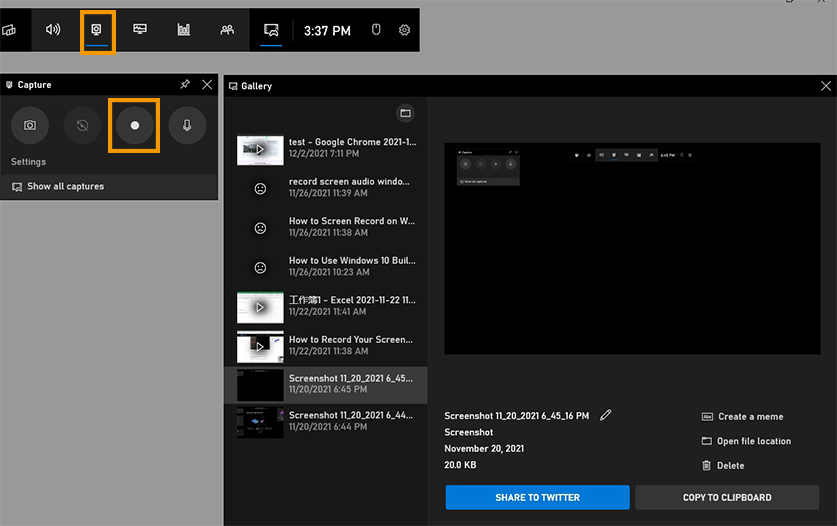 Game Bar is safe and legal.

It can slow down your PC gameplay. It might be interfering with other things in the PC which can cause slow down while playing the game.

if you want to record a gameplay that doesn't have a specific duration which might be more than four hours Game Bar might not be helpful.

It does not accept the whole desktop or file explorer.

More tips to for recording gameplay on PC: If you want to edit your recorded gaming sessions, UniConverter-a complete toolbox can help you be a better gaming video creator. Or, if you are searching for some ways to get the video game's background music, UniConverter can also help you record audio.

Bandicam is screen recording software that can record anything on the computer screen with high quality. Bandicam also allows users to record some parts of a PC. Bandicam is a highly recommended app for recording gameplay because it’s efficient and free. The app records and saves your file in different output/formats such as MP4, AVI, and other files.

It can record gameplay and save it in a smaller size without affecting the size compared to other game recording apps. There's no specific duration as it records as long as you have enough space on your PC.

To use Bandicam, the first step in using Bandicam is to install or download the Bandicam application from its website: https://www.bandicam.com/downloads. The download is free as Bandicam is a free app. 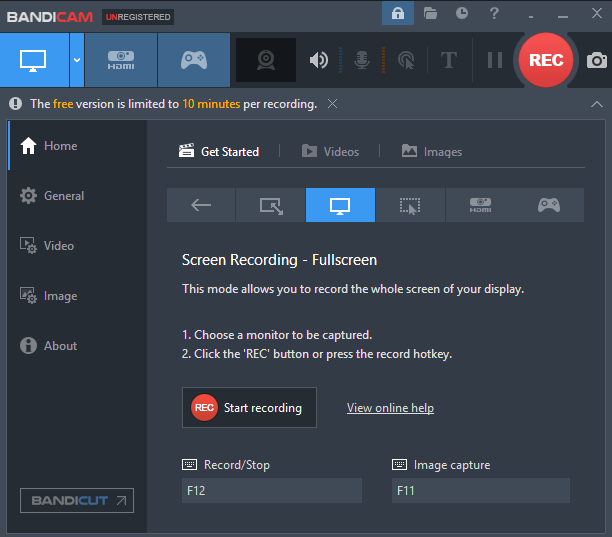 After starting the app and selecting Full-screen mode, the next step is to click the record button or better still press the hotkey (F12) to start/stop the recording. 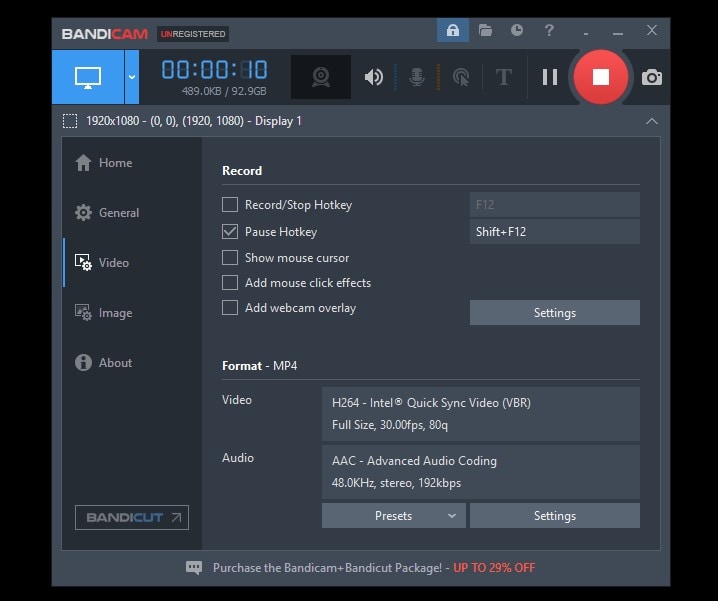 After selecting the record button and recording your gameplay, you will go back to Home then from there, you will select 'Video' this is where you will play, edit or upload the recorded videos. You can click the 'Open Output Folder' icon located at the top of the interface to access the video.

It's very efficient in Game streaming

It's easy to use

It is user friendly

It only works on Windows

It doesn't allow the inserting of text on the screen

The watermark can be annoying

It does not support Mac, Android, or Linux

Open Broadcaster Software is also known as OBS Studio is a free software recording gameplay on pc that allows you to record and stream games from your PC. The OBS Studio can also be used to prepare your microphones for game streaming start your camera for game streaming.

OBS Studio is a totally free game recorder for pc, and it has many helpful features to give you quality streams. It also helps you to record your gameplay. It not only records, you can use OBS Studio to connect to any live streaming. OBS Studio has nice features that not all free software can do, for example, it streams with various platforms like Facebook Live, YouTube Live, Hitbox, Twitch, and more.

The first step in using Open Broadcaster Software is to get the app first and this can be done by downloading it. After downloading OBS Studio pc game recording software, the next thing is to install it.

After doing the easy part which is downloading and installing the OBS Studio, you will start the app. Then you will continue by clicking + from the Sources part after. After doing this you will then select Game Capture to get started with it.

Step 3 Leave it labeled as Game Capture and select OK.

After selecting the Game Capture, the next thing is to still leave it labeled as Game Capture then select OK.

Step 4 Select the modes explained below and start record

Select any game on Full Screen.

Move to OBS. The game will show in the window which means OBS recognizes it and is recording it.

Now you can record your game by clicking 'Start recording'

It has a robust feature set

It is easy to use,

It records in high quality.

It does not work with Windows XP.

It does not support linking with an audio file as a source.

It is not user-friendly

To record gameplay, we can also use Paid Game Recorder which you have to pay to get. The following are a few selected Paid Game Recording Softwares for PC with their guidelines, pros, and limitations;

The first step is to Buy and download the Action Game Recorder from their website after downloading it then you can start recording your games.

After buying and downloading the Action game the next step is to change the recording mode to Games and Application to record the game you want to record. 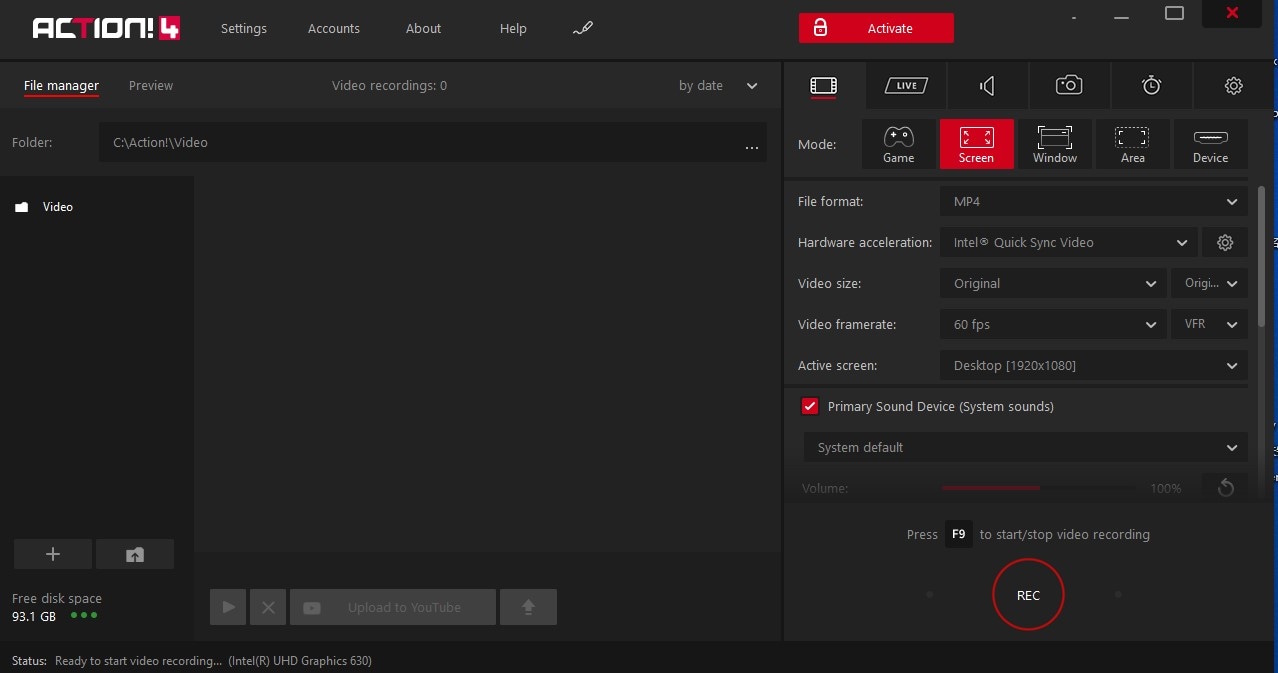 Step 3 Start the game and record

Click the F9 hotkey to begin capturing the game. HUD status changes showing that it's recording 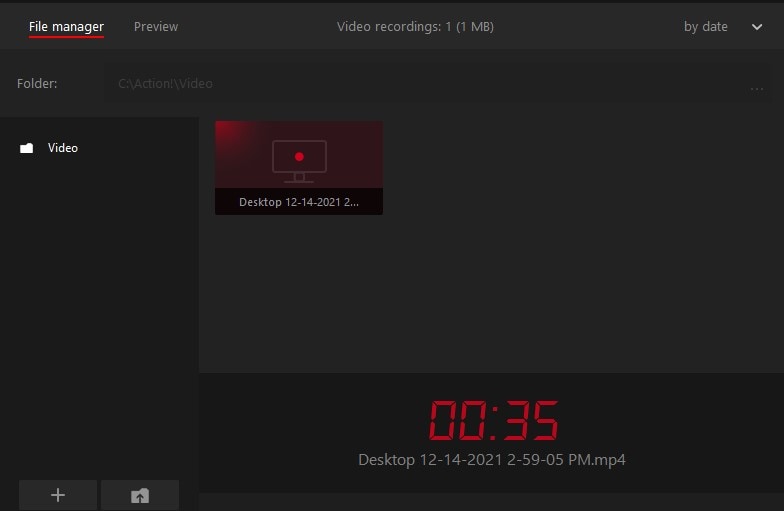 Select the File manager in the Action Game recorder's window and look for the list of video recordings. 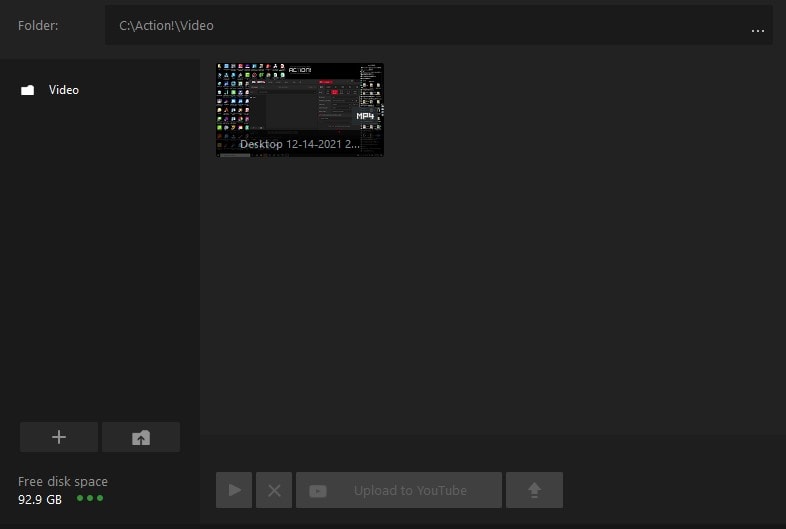 It is not stressful to use

It records video in smaller size and good quality

It can't change the video bitrates within the app.

The UniConverter is a game capture software for pc that can be used to record anything on the screen of your PC which also includes Games. It's not free, it is paid for. It's kind of expensive because you pay for it but its quality is worth the payment. The UniConverter supports all Windows and Mac, it boosts recording gameplay on them. UniConverter allows you to get your video in different formats. It has different features like; trimming of unneeded parts, inserting text, adding background music, adding color, etc.

The first step is to buy and download the UniConverter app after doing this, Install it. After installing the UniConverter software, it will be able to record gameplay by selecting the 'Screen Recorder'. 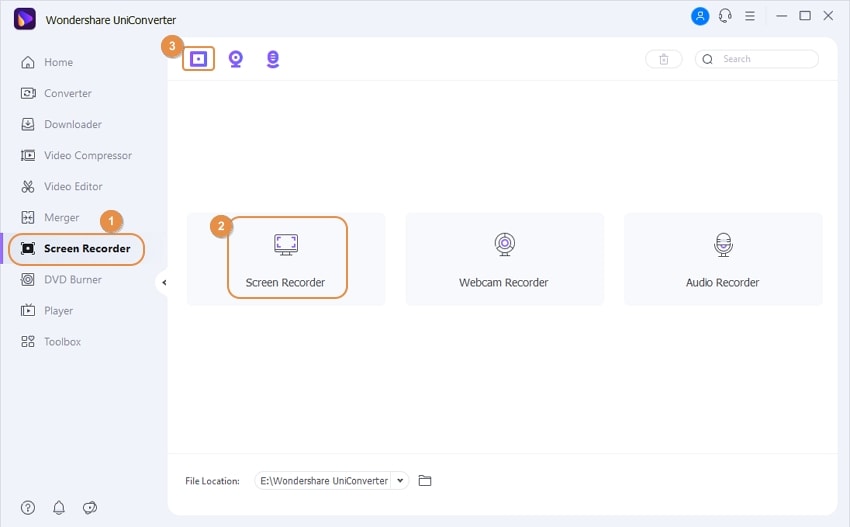 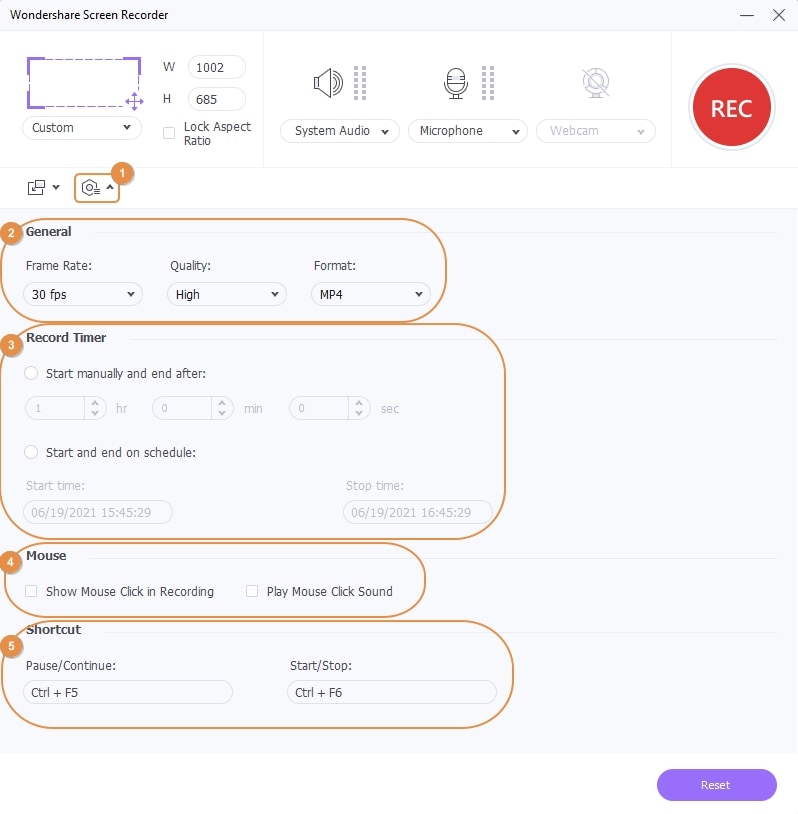 This feature allows you to picture yourself in the game recording. This is not compulsory but you might just like to insert your picture into the recording. To do this, you have to select your webcam and switch your resolution from the drop-down menu.

You can set up your recording by selecting the format of your recordings from the drop-down menu on the “General” icon. After doing this, close the settings panel and the setup is done.

To record, just click on the REC icon to begin recording your gameplay. It will then start to record the display of the PC. To edit, you can choose the circle with an icon of the pencil to add text, add color, etc. 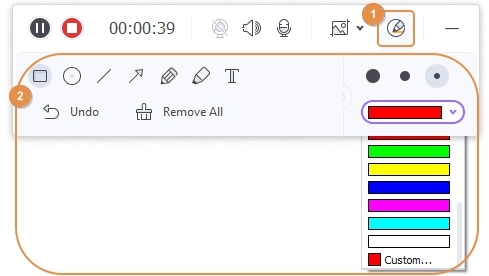 You can stop the recordings by selecting the stop button. To Re-check your gameplay record, select the open button to edit and finalize your recordings. The Edit option is located at the right side of the template. Thereafter you can share it to different platforms. 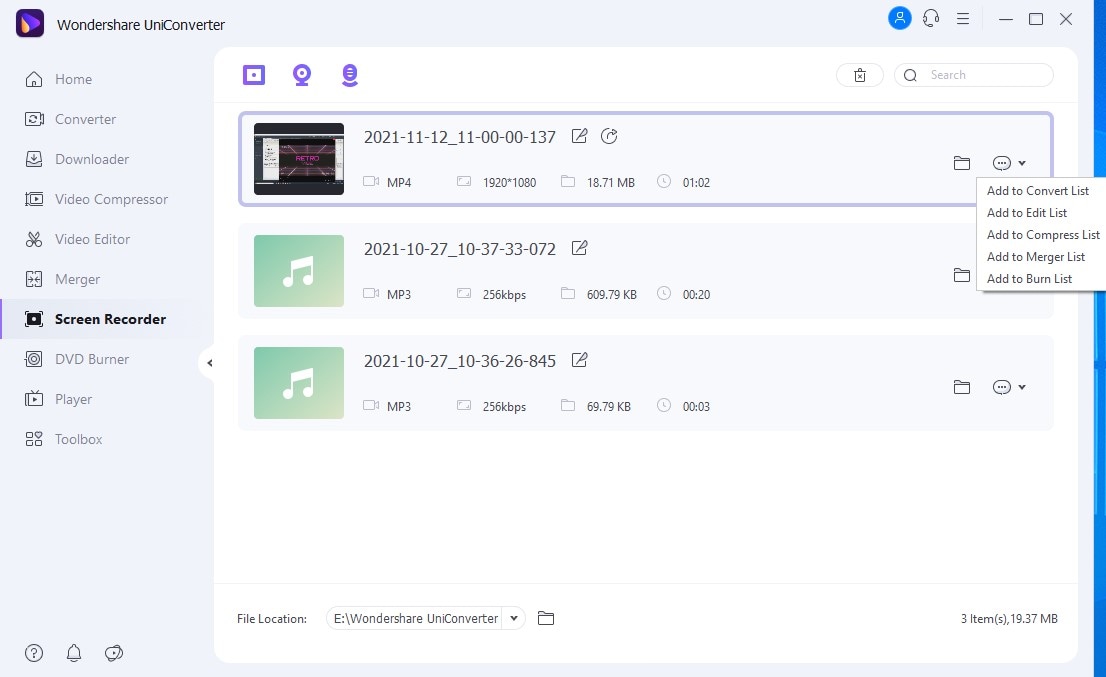 It is easy and stress-free.

It has a picture-in-picture feature.

Recordings come out in different formats.

It has a real-time drawing feature.

Allows you to edit the video after recording.

It is not available on Linux and mobile systems.

Gamecaster is also another game screen recorder for pc that helps gamers to record gameplay. It allows gamers to have the easiest and simplest way to record high-quality gameplay and game streaming.

Gamecaster makes it simple to manage recorded gameplays. It allows you to gather and edit gameplay recordings with an in-built editor. It also helps to Keep track of chat and events and engage with your audience. Gamecaster has the most recent NVIDIA and AMD optimizations to prevent lagging, game streaming.

Step 1 Sign in and link Gamecaster to streaming medium

After getting the Gamecastee software and installing it, you will have to first load up Gamecaster, it will then ask you to sign in using an account on Facebook, YouTube, or Twitch. Certify and link Gamecaster to the streaming medium you plan to stream with. 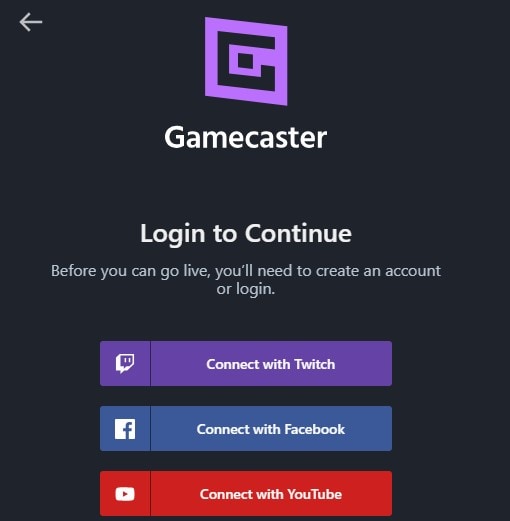 Secondly, you need to confirm that you can hear everything clearly and audibly before you begin the game record. To set up your Audio devices, Go to My account from there go to Settings then go to Devices and configure your sound system. Also, you need to set up your microphone to ensure that you are heard also. 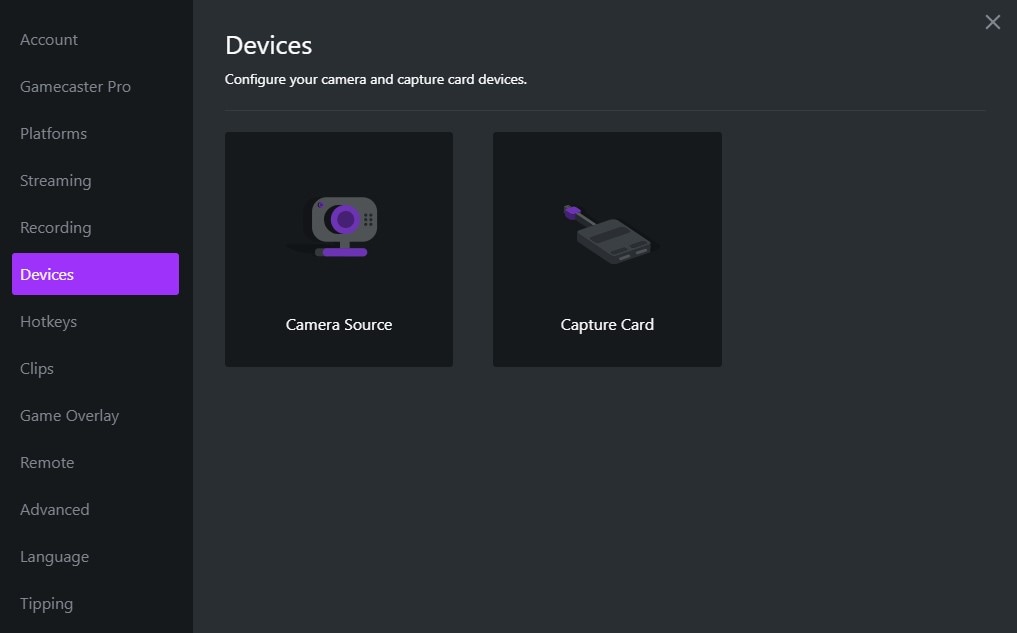 Step 3 Get ready for your main scenes.

Normally, you begin with an empty scene with the full-screen main source that is created to record most games. You can begin to stream after this minimal configuration and put attention on your game. With this, editing the scene to add settings of your choice like a chat window, background music, etc

When you configure your streaming and recording settings, it will allow you to begin streaming and capturing the game immediately. Custom settings can also be done to select advanced settings for the game stream.

After completing all the previous 5 steps, all that is to be done is to click on the stream or record button in the main Gamecaster screen or the in-game HUD. Then you are good to go.

It's easy to use

You can select a different format for your video

Asides from recording, it keeps track of chats and events

2 Methods to Convert WebEx Recording to MP4 with Easy Steps

After recording with online recorders, we may get the file in WebEX format. But how to convert WebEX recording to MP4? This article gives easy solutions.

Recording screen is helpful for our work and study. This article provides you with the introduction and relative recording guide of free screen recorders on Mac.

How to Record Screen with Audio [Windows, Mac, Online]

5 Popular Online Screen Recorders and How to Use Them

There are many Windows 10 screen recorders to make tutorial videos, record the meetings, etc. And this article tells the intro and recording steps of the 8 best screen recorders.